Blackburn Lake was home to the Blackburn Swimming Club in the early 20th century and was the venue for swimming carnivals and diving competitions. Today the lake is a public park with nature trails, but unfortunately no swimming. 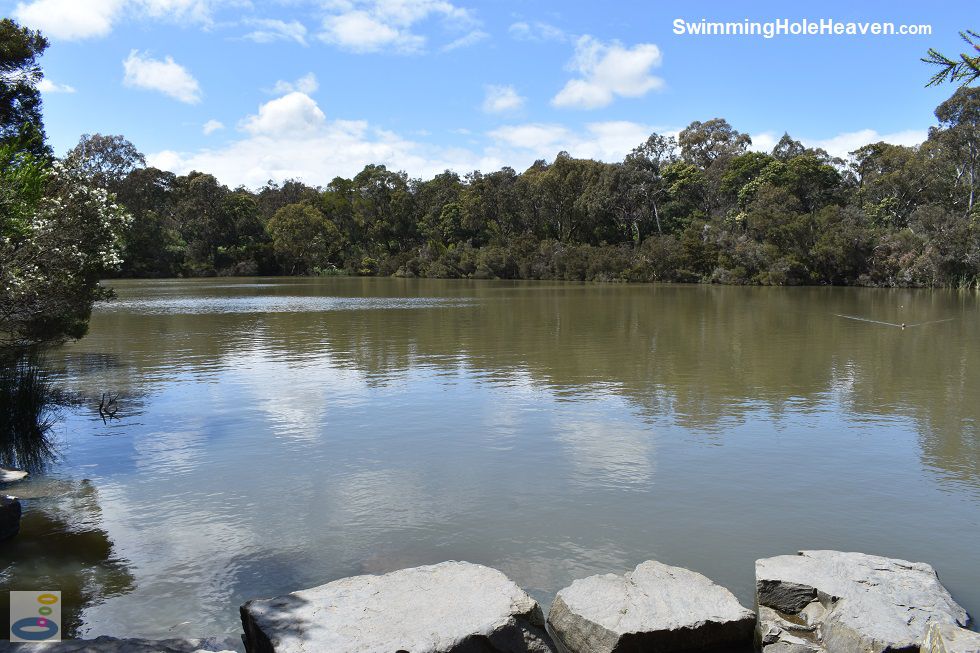 According to information boards at the lake, the lake itself was formed in the 1880s when a developer dammed this branch of Gardiners Creek as part of a housing development. At that time it was a popular destination for picnics, when it was known as Lake Park, Blackburn.

The earliest records I could find about swimming at Blackburn Lake were in 1910, when a meeting unanimously decided to form the Blackburn Swimming Club. The club then held swimming carnivals in at least 1911 and 1912 including a State diving championship. A diving stage, dressing room and starting board were constructed, but the diving stage was reported to have collapsed. Rivalry with the nearby Surrey Park Swimming Club in Box Hill was high, particularly for the squadron (relay) race, with pre-event trash talking by the Blackburn boys reported in the Box Hill Reporter. The swimming club may have dissolved during the First World War, as there is no mention of the club that I could find again until 1927, when there was another public meeting to form the Blackburn Amateur Swimming Club, with the club secretary reported as requesting "two lifebuoys, two lifebelts and a set of grappling irons" in the same year. There was also a drowning at the lake in 1927. It is unclear whether the club was actually formed at that time, as there was another report in 1932 that the Blackburn Swimming Club had been formed. In addressing a public meeting in 1932, a representative from the Victorian Amateur Swimming Club commented that "it would be difficult to find a more beautiful spot or a finer stretch of water than the Blackburn Lake", despite the "peculiar smell" due to rotting vegetation when the lake level was low, with others pointing out that "famous swimmers … learned to swim in the lake". 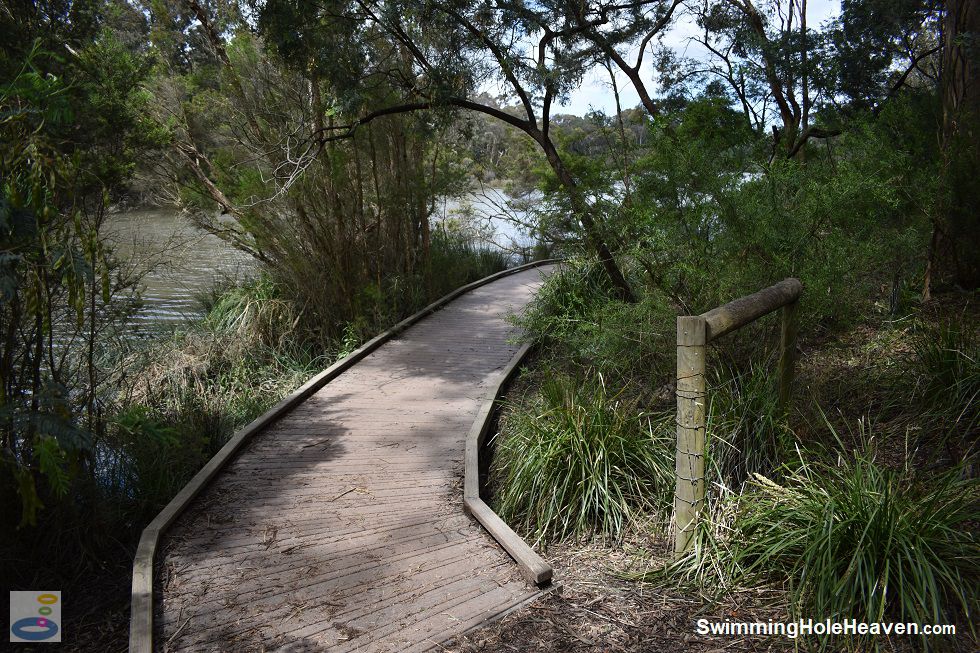 Above: One of the lakeside boardwalks at Blackburn Lake (Order this image)

Today the lake has a series of nature trails running through the bush right around the lake, with boardwalks, viewing platforms and seating areas near the water. The signs on site are ambiguous about whether it is legal to swim in the lake or not, but brochures produced by the Blackburn Lake Sanctuary Advisory Committee advise visitors to not swim at the lake. Based on the likely poor water quality from local urban runoff, and the poor visibility in the water, I would not recommend it either. There is a playground, a lawn area and public barbecues for a day out, reminiscent of times gone by, but without the swimming.
Other Information Before You Go:
Location: Blackburn Lake Sanctuary, Central Road, Blackburn, 18 km east of the Melbourne CBD
Latitude:-37.823806 Longitude:145.161089
Getting there: From Blackburn head south along Blackburn Road and east along Central Road for 1 km until you reach the lake car park. Bus route 736 also has a stop next to the car park.
Facilities: Public toilets, car park, picnic tables, water taps, public barbecues, playground, visitor centre, sun dial, artists' trail, rubbish bins, walking trails, viewing platforms
Entrance fee: None
Water temperature: Mild
Water clarity: Murky
Under foot: Mud, silt
Maximum water depth: Greater than 2 metres
Minimum swimming proficiency required: Not applicable, no swimming permitted
Prohibitions including whether you can bring your dog: No swimming, no smoking near the playground, no fishing, no boating, no feeding the ducks, dogs must be on a leash
Sun shade: Shade available along most of the walking trails. Some covered picnic tables.
Opening times: Always open
Wheelchair access: Yes, including disabled parking and wheelchair accessible toilet
Accommodation Options: Camping is not permitted at Blackburn Lake. If you are planning to stay overnight in the area near this former swim, you can try the following options around Blackburn. All distances below to the nearest point of the lake are by road, not as the crow flies. Booking your accommodation via these links may result in a commission (at no additional cost to the price of the linked item) to swimmingholeheaven.com that helps maintain and enhance this website.
Managing authority: City of Whitehorse
Nearby attractions: Surrey Dive, home to a rival swimming club in Box Hill 5 km by road to the west.
Before you head out, check with the managing authority for any current change of conditions. Specific to this site, the managing authority advises of the presence of snakes along the walking trails.
Locality Map:
The marker indicates the location of the car park at the lake. If the map is not zoomed in locally, as can occur with some browsers, simply click or tap on "View Larger Map" below.
View Larger Map
Comments:
Here is one recollection of swimming at Blackburn Lake in the 1950s and 1960s:

"Born in Blackburn in 1946, many of the local youngsters swam regularly in the late 50s and early 60s. It was free for a start and a lot closer than going to Surrey Dive (Nunawading Pool had not been built at that stage). It was a fun place to swim and I can still remember the day I first swam across it. It was a bit squidgy underfoot in places and we were a bit concerned about what was lurking in the mud. There was a submerged rock formation not far out from the edge where you could sit and stay cool. We would often spend all day there with mum coming down with sandwiches at lunchtime. Ahh, what freedom."
- R. Burn from Melbourne, Australia 12/1/2018

If you have any memories of swimming at Blackburn Lake I would love to hear about them, particularly (but not only) if you were part of the swimming club activities. I have been unable to locate any historical photos of swimming at the lake, so if you have some that you would like to share, also let me know by filling in the comment box below. All fields are required if you would like your comments published on this website.