Booran Reserve in Glenhuntly is a new, water-inspired playground on the site of a former Melbourne Water service reservoir. The park opened on Thursday 6 April, with a Community Fun Day (open day) scheduled for Sunday 9 April from 12-3pm. I visited the day after it was opened and it was already full of kids enjoying all areas of the park. There are two separate water play areas in the park, with pumps, sluice gates and an artificial stream in one area, and a large splash pad with a variety of sprinklers and fountains at the other end of the park. 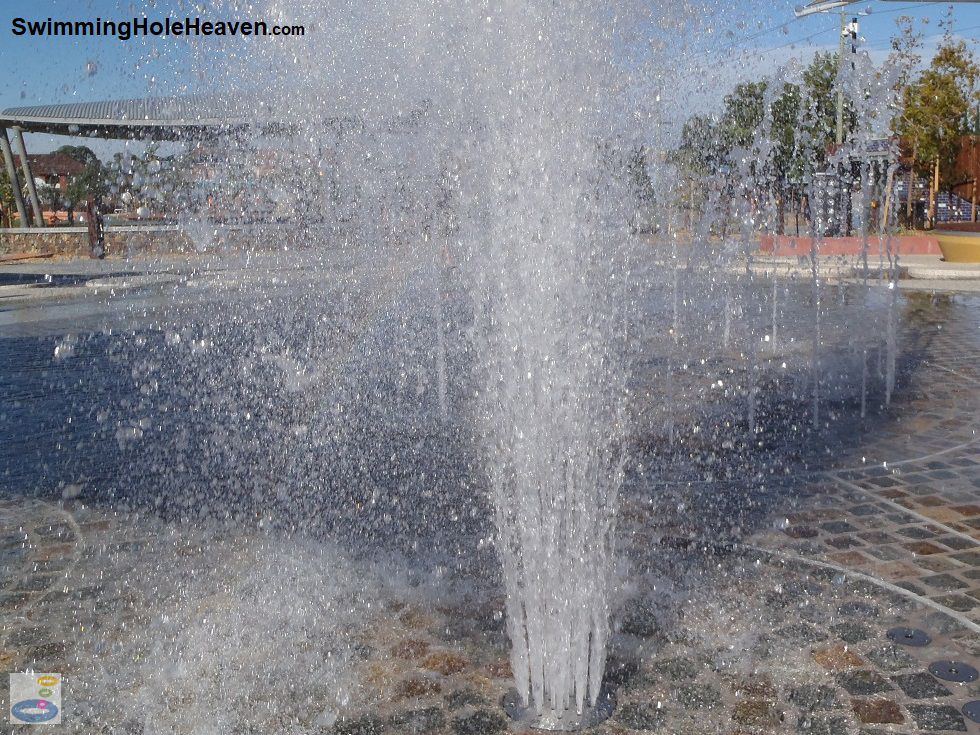 Above: The Glenhuntly Geyser in action (Order this image)

The splash pad is larger than most, with three distinct groups of fountains. These are half a dozen shin-high sprinklers on one side that are suitable for toddlers. On the other side there are several rings of sprinklers that rise up to around one metre in height, with a smaller ring of more powerful jets shooting up about twice as high again in the middle. All of the water then drains off into a river delta where the water is channelled in between several large, flat stepping-stone islands. The fountains are on an alternating cycle every few minutes, which seems to keep kids actively moving from one side of the splash pad to the other, almost in a herd, as each group of fountains is successively turned on and off. The area has lots of seating around both sides, and a dry area with low benches to set your gear down. The splash pad operation is automated (so don't go looking for a start button) and didn't seem to stop during the hours of operation noted below.

At the other end of the park, a hand pump and a push button trickler send water into a stone channel that meanders its way under a bridge, through several flat boulders and hand operated sluice gates, and down into a swamp. An Archimedes screw (which looks a bit like a giant corkscrew) is an intriguing device that can draw up the water against gravity to the nearby elevated sandpit. At this site, the screw only works when the top sluice gate is closed for at least a few minutes and the weir pool behind it is deep enough for the screw to scoop up some water - otherwise it does nothing except spin around. When compared to similar water features at other parks around Melbourne, the length and shape of the stream, and the physical separation of different reaches by walking paths passing over it, meant that this area was less prone to being dominated by one or two bossy kids.

The park retains parts of the former reservoir structure, including a visually striking, several metre tall section of stone wall on Booran Road, and two longer sections of reservoir wall that form a barrier along the back of the park. Running through the climbing mound is a tunnel that has been designed to resemble a giant water pipeline, similar in appearance (but not in scale) to what previously would have been used to transfer water in and out of the reservoir. 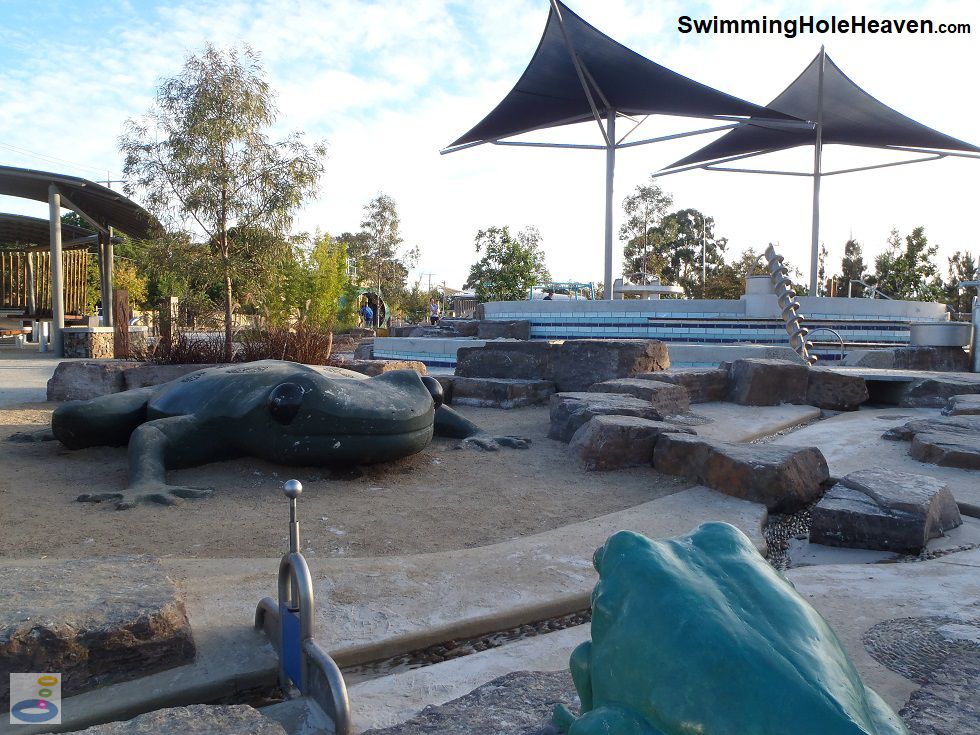 Above: Two giant frogs poised to leap, beside the trickling stream (Order this image)

There is a wide range of play equipment and a variety of play areas within the park, including the hallmark ten metre high slide (which you can only get into by climbing up a rope structure), bamboo forests, a flying fox, swings, a hamster wheel, a grassy knoll, an open area (partly paved and partly grassed) for kicking a ball around, plus more that I'll leave you to discover. The rope structure is one to be wary of if you have very young kids, because they can wander out from an easily accessible mound onto a net and then access a rope climbing area with about a two metre drop to the ground. I saw several parents nervously watching their kids from below the ropes, ready to catch them if they fell. Lastly, the park even has its own "urban forest" hidden behind the old dam wall.

Here is a Splash-Rascals video of Booran Reserve, featuring Splash-Rascal Bunny Rabbit trying out the new playground in the first few days after the park opened. Bunny Rabbit is pleased to report that this park is fantastic.


Other Information Before You Go:
Location: Corner of Booran Road and Glenhuntly Road, Glenhuntly, 13 km (approx. 20 min. drive) south-east of the Melbourne CBD
Latitude:-37.888744 Longitude:145.037841
Getting there: By public transport, take the train to Glenhuntly station and walk west (or catch the number 67 tram) 300 metres along Glenhuntly Road to the park. By car, head along the Princes Hwy/Dandenong Road to Caulfield then head south along Kambrook Road, veering left into Booran Road at the second roundabout.
General facilities: Public toilets, barbecues, playground, sandpit, lawn area, park benches, sheltered picnic tables, rubbish bins, flying fox, tennis/cricket wall, basketball rings, lawn areas, etc.
Baby change facilities: There were none in the toilet nearest the splash pad, but the hooks on the wall and the nearby signs telling you to use the baby change facilities in these toilets suggest that a baby change table will be installed soon.
Sun shade: Shade cloths over some areas of the playground, but not all
Entrance fee: None
Opening times: Always open. The hours of operation of the splash pad are 9.30 am to 11 pm (so you can even come for a night splash if you want). The dates for seasonal operation have not yet been finalised by the managing authority.
Wheelchair access: Wheelchair accessible paths and toilets
Prohibitions: Dogs must be on a leash. Specific to the splash pad: no running or rough play, do not drink the water or use the fountains to clean hands, no food, no glass or sharp objects, no pets, no alcohol, no drugs, no smoking, do not enter the water play area if you have had diarrhoea within the last two weeks, children who are toilet trained must use swimming nappies. The managing authority also requests that the baby change area in the public toilet (which I'm yet to find) be used for changing nappies, and strongly recommends adult supervision, particularly for young children.
Accommodation Options: If you are visiting Melbourne and want to stay in the area near this water feature, you can try the following options. All distances below are by road, not as the crow flies. Booking your accommodation via these links may result in a commission (at no additional cost to the price of the linked item) to swimmingholeheaven.com that helps maintain and enhance this website.
Managing authority: City of Glen Eira
Nearby attractions: Harleston Park artificial stream in Elsternwick, also in the City of Glen Eira
Before you head out, make sure to read the water safety information and check with the managing authority for any current change of conditions. Note that cctv cameras operate in the park.
Locality Map:
The marker indicates the approximate location of the splash park. If the map is not zoomed in locally, as can occur with some browsers, simply click or tap on "View Larger Map" below.
View Larger Map
Comments:
If you would like to leave a comment about this water feature, please fill in the comment box below. I am particularly interested in your experiences after visiting, and any changes in conditions, etc. All fields are required if you want your comments published on this website.