The Yarra River at Deep Rock was home to a local swimming club in the early 20th century. The rock wall on the opposite bank is over 60 metres high and in the past has been the launch pad of a cliff diving world record.

Above: The Yarra River at Deep Rock (Order this image)

With the picturesque surrounds, the deep water pooled back from Dights Falls downstream, and the relatively easy entry from the northern bank of the river, you can understand why this would have been a popular swimming spot. In the early 20th century, similar swimming clubs were dotted all along the Yarra River throughout the inner suburbs of Melbourne upstream of this point.

A small, dedicated group of local swimmers known as the Yarra Yabbies has returned to swim in the river since mid-2021. They have been swimming on most days of the year, except after rainfall, when poor water quality can make the river unsafe for swimming. I was fortunate enough to swim with the group one morning, not long after sunrise, in early Autumn 2022. With light mist on the water, gum trees lining the steep river banks, and hot air balloons drifting overhead, it was quite an idyllic setting for a swim. In the water I was surprised by the absence of noise from the nearby Eastern Freeway, which did not penetrate down into the gorge at river level, as well as the absence of much current. The water was deep enough to swim long distances upstream without touching the river bed. 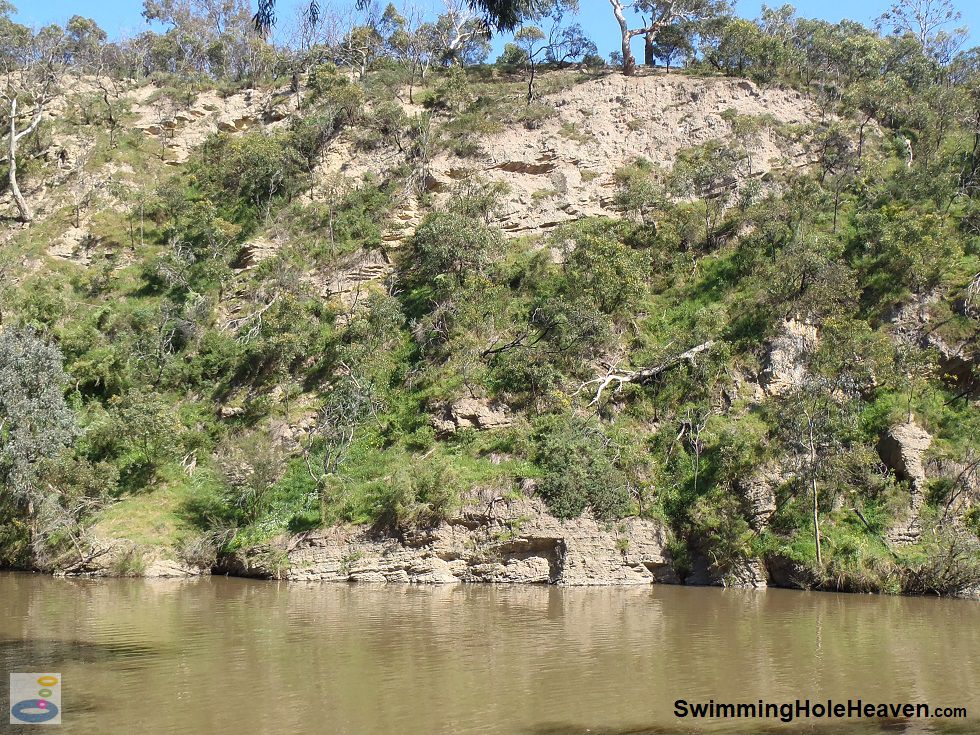 Above: The Yarra River at Deep Rock (Order this image)

There are a series of large flat boulders that have been placed on the river bank to allow easy entry and exit from the water. These stone steps are also used by lots of larger dogs throughout the day to jump in and out of the water. If you are bringing your dog, there is an open space about 30 metres back from the river at Deep Rock where you can give them some exercise.

This swimming hole is locally significant due to its history and its proximity to Melbourne, but did not make it into my top 50 in Victoria. The main reason being that the water quality can be poor, especially after rainfall, and there is zero visibility in the water from the high sediment load in the Yarra at this location. If you want to swim in the Yarra, I prefer a couple of swimming holes further upstream, which did make it into the top 50, so if you are looking for a swimming hole in Melbourne in cleaner water, grab yourself a copy of the guide to Freshwater Swimming Holes in Victoria.

Other Information Before You Go:
Location: Deep Rock Road, Fairfield, 5 km north east of the Melbourne CBD
Latitude:-37.797251 Longitude:145.004430
Getting there: Ride your bike along the Yarra Trail from Flinders Street Station; or take the train to Victoria Park station and walk 900 metres north along Lulie St to Abbot St and then left on Trenerry Crescent; or drive along Johnstone St to Trenerry Crescent. The car park for Dights Falls is just around the 90 degree bend in Trenerry Crescent. Deep Rock is a 200 metre walk upstream of Dights Falls. Alternatively you can access Deep Rock from Yarra Bend Road in Fairfield. Park in Deep Rock Road near the Sir Herbert Olney Oval and then walk west down to the river.
Facilities: Picnic table
Entrance fee: None
Water temperature: Mild
Water clarity: Murky
Under foot: Mud
Maximum water depth: Greater than 2 metres
Minimum swimming proficiency required: Experienced
Prohibitions including whether you can bring your dog: None stated on site
Sun shade: Shade available in and out of the water
Opening times: Always open
Wheelchair access: Yes
Accommodation Options: There is no camping at Deep Rock. If you are visiting Melbourne and want to stay near this swim, you can try the following options. All distances to Dights Falls Reserve below are by road, not as the crow flies. Deep Rock can also be reached from Clifton Park and Quest Abbotsford via the Capital City Trail or Main Yarra Trail bike paths respectively. Booking your accommodation via these links may result in a commission (at no additional cost to the price of the linked item) to swimmingholeheaven.com that helps maintain and enhance this website.
Managing authority: Parks Victoria
Nearby attractions: Dights Falls, 300 metres downstream.
Before you head out, make sure to read the swimming safety information and check with the managing authority for any current change of conditions. Specific to this site, note that there can be underwater hazards that are difficult to see, and that poor water quality can make the water unsafe for swimming, particularly 48 hours after rainfall in the catchment upstream.
Locality Map:
The marker indicates the approximate location of the river bank opposite the Yarra River at Deep Rock. If the map is not zoomed in locally, as can sometimes occur when loading, simply click or tap on "View Larger Map" below.
View Larger Map
Comments:
If you are old enough to remember swimming here in the past, I would love to hear about it. Here are some personal accounts that I really enjoyed reading. These recollections are presented below from oldest to youngest. Particular thanks to P.Balfour and B.O'Donovan for sharing some past memorabilia about swimming at Deep Rock: 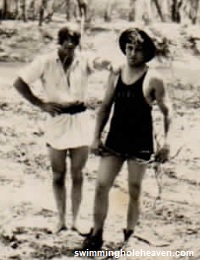 "I have a photograph of my father, Bartle John O'Donovan, in a Deep Rock Swimming Club costume (see photo left/above), dated from around 1912 to 1924. It was taken on the banks of the Murrumbidgee River near Carrathool, when Bartle was visiting family in NSW. Bartle lived in Mater Street Collingwood from about 1912 to 1927, except for the period of his World War I service in France from 1917 to 1919. Mater Street was an easy walk to the swimming club. When I stayed in the same house as a teenager in the 1950s, we used to take walks through Yarra Bend Park" - B. O'Donovan, Evanston Park SA, Australia 14/3/2018 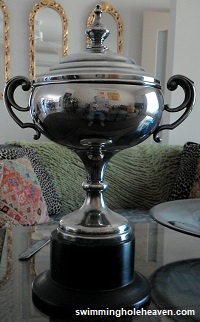 "When we were young in the early 1930s our father took us to Deep Rock early in the mornings. We lived close by in Clifton Hill. We had swimming lessons there from a champion swimmer of that time. The water was lovely and if we could swim right across to the other side we were considered champions too." - J. Flynn, Gold Coast, Queensland, Australia 12/2/2018

"The year 1941 - I was ten years old and taught myself to swim at Deep Rock. Very few people could swim in those times. There used to be a man by the name of Paddy Kennedy who would swim from Deep Rock to Fairfield daily in both summer and winter. There used to be two diving boards - one was removed as dangerous. I used to dive into the river and bring up fresh water mussels. The Yarra was trout water before european carp took over." - W.Gosstray 21/9/2016

"I grew up in Abbotsford and well recall this popular spot, but more well known was the annual 1.25 and 3 mile river swim races held by the Abbotsford Swimming Club. The 3 mile swim started at Fairfield boat sheds and finished at Studley Park boat sheds just upstream from Deep Rock. Studley Park boatshed area was probably more popular for daredevils who would dive from Kanes Bridge into the Yarra River and swim down to the boatsheds and Deep Rock. In those days (40's to late 50's) the water was quite clean. Unfortunately, the Abbotsford swimming club in Marine Parade was closed after the tragic drowning of John Brady in the 50's and relocated to Fitzroy." - G. Douglas, Twin Waters, Queensland, Australia 20/12/2017

"I remember many days of swimming there with my family in 50's. My mum actually taught me to swim in the old concrete pool. They had the old concrete dressing sheds up the hill. The bigger kids would swing out on ropes off the trees into the river. My older brother once dived into the murky water and split his head on the posts on the edge of the pool. Another time jumped into the pool and landed on broken glass and cut his foot. That brother of mine was always in trouble. But apart from that we all had a great time swimming there. I was very disappointed later years when I went back and it was all gone." - V. Parker, Melbourne, Australia 27/9/2015

"My eldest brother Peter and I would often swim at Deep Rock. We grew up in Clifton Hill, about 15 minutes walk to Deep Rock. We used to cross a foot bridge across the Merri Creek until it fell down. The Yarra River water was fairly clean then in the early 1950s. The pool that had the diving boards was full of reeds at that time and the bottom of the children's pool as we knew it was usually covered with mud. We would sometimes swim across the river to the other side. Our Uncle George often swam there right up to the Fairfield boat sheds and at times dived off the rock jutting out from the cliff face. That has gone now. Unfortunately our uncle drowned in the river near Kanes bridge. Many of our happy hours were spent at Deep Rock." - D. Styles (nee Young), formerly of Melbourne, Australia 1/6/2021

"On hot days in the 1960's my mother (and occasionally, older brothers) would trek to Dight's Falls (overgrown, with no modern path) and then on to visit the Council clydesdales in their resting paddock and then to the concrete dressing sheds and swimming pool at Deep Rock. I still have photographs of myself sitting at the edge as my brothers dive into the river. Muddy and murky but still refreshing." - M.R. MacKenzie, Melbourne, Australia 21/3/2021

"I recall swimming there in the sixties. It was so special and refreshing. I don't recall any hazards such as broken glass or health issues. But I was a kid that had just moved from Rose Bay in Sydney and in those years Rose Bay water was the benchmark for poor water conditions and smelled horrible. Deep Rock was pristine compared to Sydney harbour in those days. I do recall the water being muddy. But it was so good on hot days and a favourite place to have a swim and picnics in Melbourne. We lived at Box hill and driving to the city would often pass it and see the kids swimming and wished we didn't have to go to town." - Karen, Brisbane 27/12/2016

If you have any memories of swimming at Deep Rock, please fill in the comment box below. All fields are required if you would like your comments published on this website.