Bungies Hole was a popular swimming hole up to the 1950s, located in a bend of the Werribee River, just behind Chirnside Park. It is an elliptical pool around 75 metres across and 130 metres long, and reportedly up to 30 metres (100 ft) deep. Swimming is no longer permitted at Bungies Hole. 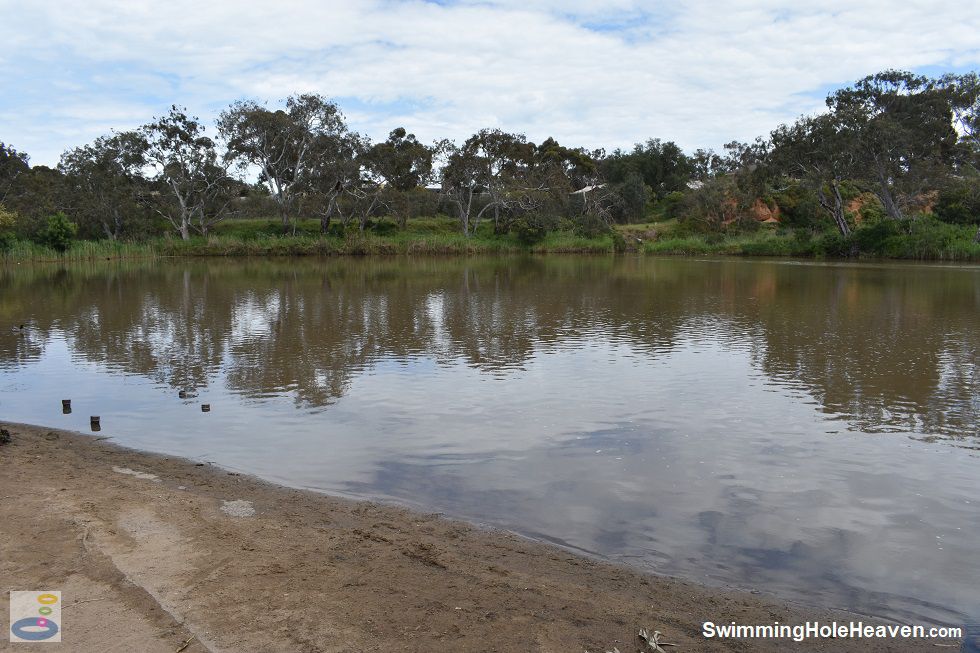 Above: Werribee River at Bungies Hole (Order this image)

According to various newspaper articles from first half of the 20th century, Bungies Hole included an Olympic Swimming Pool, a swimming club (formed in 1924), a diving tower and changing rooms. The Werribee Shire Banner reported hundreds of bathers in the water at Bungies Hole on weeknights over the holidays in 1928. A 1932 Weekly Times article on the Werribee Swimming Club described Bungies Hole as a "fine natural freshwater basin" that is "one of the best [swimming venues] in the State", having hosted the one mile State Championship for several years prior.

The Sydney Daily Telegraph reported in January 1945 that NSW State Swimming Champion Jack Campbell had been training in the Olympic pool at Bungies Hole whilst working as an air trainee at the nearby RAAF base. The origin of the name Bungies Hole is a matter of some conjecture, with Bronwen Hickman's article on Bungey's Hole (note the earlier different spelling) providing a good overview of the various theories about where the name came from. 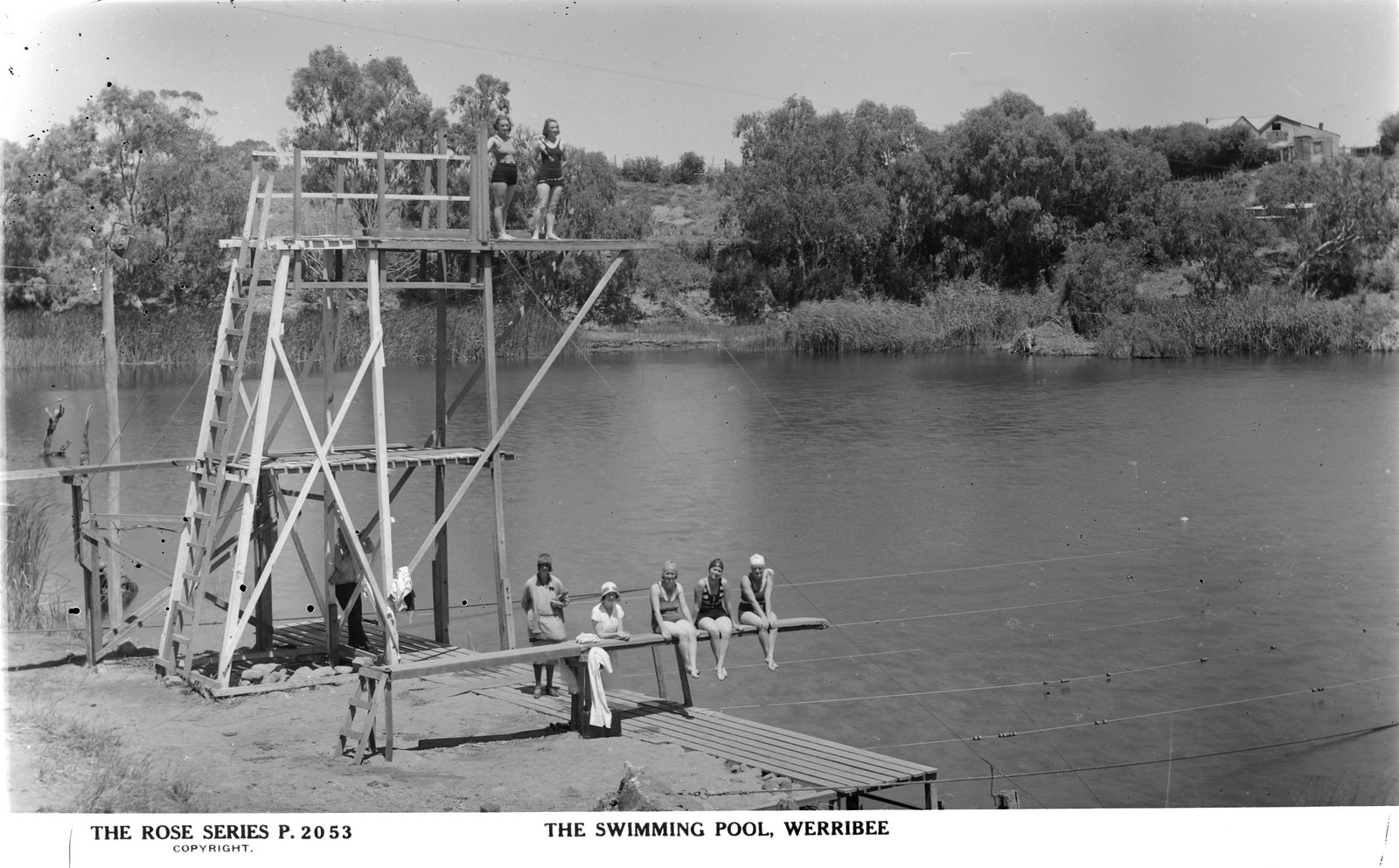 Complaints about the suitability of Bungies Hole were evident as early as 1934, when the Werribee Shire Banner reported a public meeting unanimously concluding that Bungies Hole was unsuitable for swimmers because of river floods. It was not until two decades later, after more floods and drownings, that an Olympic Pool was constructed in Chirnside Park after much debate on the proposal in the early 1950s.

Bungies Hole is now home to only the Werribee and District Anglers Club, which has a clubhouse overlooking the river. A sign outside the clubhouse makes it clear to visitors that swimming is no longer permitted. The chlorinated Werribee Outdoor Pool that replaced Bungies Hole is only a few minutes walk away near the entrance to Chirnside Park for anyone wanting to have a swim. 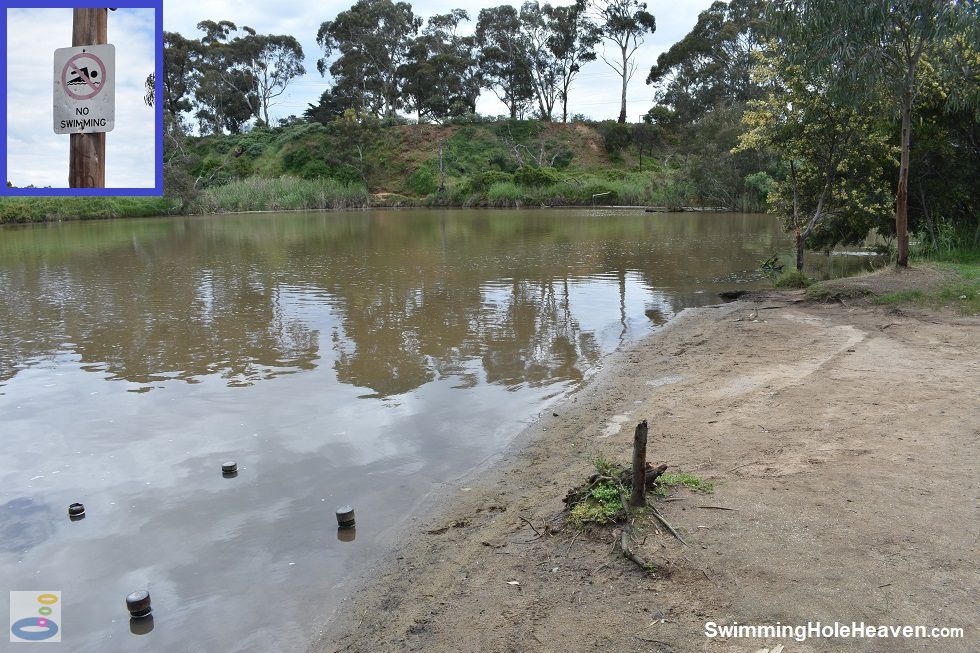 Above: Werribee River at Bungies Hole    Inset: The no swimming sign (Order this image)

Bungies Hole can be reached by a concrete path along the riverbank and is still a nice spot for a stroll or a bike ride, with several picnic tables and park benches dotted along the trail. If you are visiting, take a look at the outlet of Bungies Hole, where you can see the water banking up behind a rock bar with a concrete top. According to the caption on a 1984 photograph by Ron Rixon, this area was a small swimming pool created for young children, commonly known as the Little Pool. 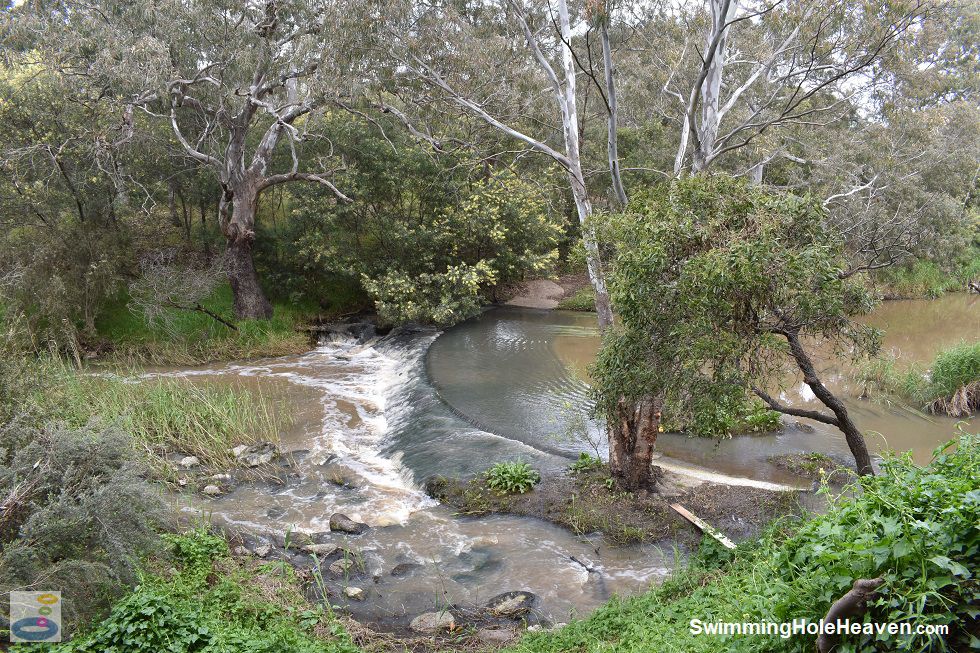 Above: Little Pool at Bungies Hole outlet (Order this image)
Other Information Before You Go:
Location: Chirnside Park at the western end of Watton Street, Werribee, 32 km south west of the Melbourne CBD
Latitude:-37.905817 Longitude:144.649980
Getting there: For locals, ride your bike along the Werribee River Trail until you reach Chirnside Park. Bungies Hole is in front of the Angling Club. For those driving, there is car parking throughout Chirnside Park, including outside the Angling Club.
Facilities: Angling Club clubhouse, picnic table, park bench, bike path, car park
Entrance fee: None
Water temperature: Mild
Water clarity: Murky
Under foot: Concrete, silt, mud
Maximum water depth: Greater than 2 metres
Minimum swimming proficiency required: Not applicable, no swimming allowed
Prohibitions including whether you can bring your dog: No swimming. Dogs permitted.
Sun shade: Shade available along the river bank from river gums. No shade at some of the picnic tables along the bike path and at Bungies Hole.
Opening times: Always open
Wheelchair access: Yes to the Angling Club with a view of Bungies Hole. There are steps down to the edge of the water. Priority parking for the disabled is located outside the Angling Club.
Accommodation Options: There is no camping at Bungies Hole. If you are visiting Werribee and want to stay near this former swimming hole, you can try the following options. All distances are by road, not as the crow flies. Booking your accommodation via these links may result in a commission (at no additional cost to the price of the linked item) to swimmingholeheaven.com that helps maintain and enhance this website.
Managing authority: Wyndham City Council
Nearby attractions: Riverwalk Splash Park, 4 km by road to the south-west.
Before you head out, make sure to read the swimming safety information and check with the managing authority for any current change of conditions.
Locality Map:
The marker indicates the approximate location of the car park beside Bungies Hole. If the map is not zoomed in locally, as can occur with some browsers, simply click or tap on "View Larger Map" below.
View Larger Map
Comments:
If you have any memories of swimming at Bungies Hole in the past, I would love to hear about it. Leave me a comment via the comment box below. I am also curious as to whether anyone could confirm if the current day Werribee Anglers clubhouse is the former changing room for the pool, as it looks similar based on old photographs of the site. All fields are required if you would like your comments published on this website.