Surrey Dive was a popular swimming hole in the Melbourne suburb of Box Hill that operated from 1905 to 1967. It was before my time, but my mother, who grew up in the 1950s, can remember making the trek across town to swim there. It was notorious for its dimensions. Being a former quarry for a brickworks, the hole was extremely deep and was surrounded at the water's edge by sheer, steep cliffs. 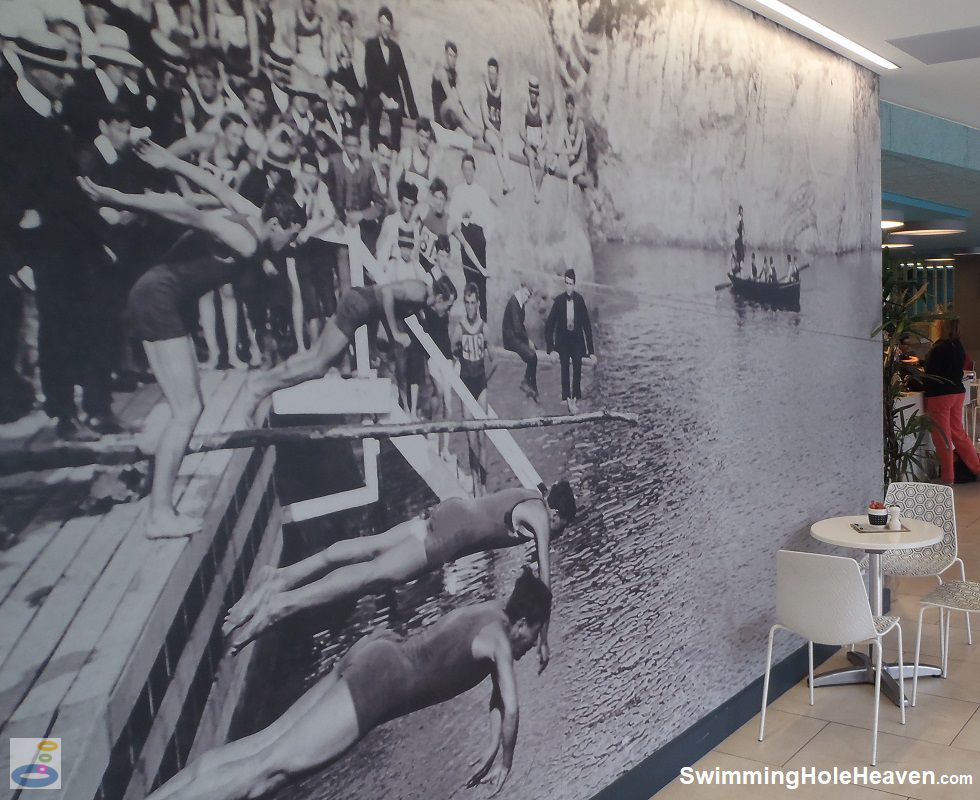 Above: The wall of the Box Hill Aqualink Cafe highlighting the pool's historical connection to the former Surrey Dive (Order this image)

Growing up in the eastern suburbs in the 1970s and 80s, I never knew that Surrey Dive had ever existed. According to local historian Bob Padula, personal accounts published by local swimmers such as Rev Dr Gordon Moyes, notes from the current Surrey Park Swimming Club and the commemorative plaque on site, Surrey Dive was longer and wider than modern pools, at around 100 yards long by 90 yards wide, with a water depth of 45 feet. Surrey Dive was the first Olympic standard swimming pool in Australia, and the site included 10 lanes, diving boards and changing rooms.
Share this swim:
Australian Olympic swimming legend Frank Beaurepaire set a world record for the one mile distance there. Over time however, the risks of cliff diving injuries and drowning were clearly too high, and the water quality wasn't great, so in 1939 the council opened the adjacent public baths. You can see the pool (now known as Box Hill Aqualink) at the top of the hill from Surrey Dive.

Surrey Dive remained open in parallel with the public baths for close to 30 years. However, despite its size, Surrey Dive wasn't drought proof. In the 1967/68 drought in Victoria, the dive dried up and the council decided to fill it in and turn it into an ornamental lake. 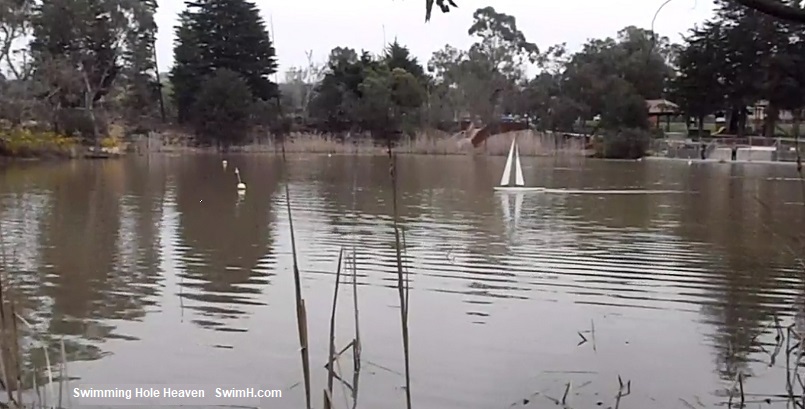 Above: Model boat racing on a Sunday morning at the former Surrey Dive swimming hole (Order this image)

Today Surrey Dive is home to a model boat racing club and a few ducks, but no swimmers. There is a path that runs around the perimeter of the lake, and a large playground behind the north-western side of the lake. For modern day competition swimmers, a trip to Surrey Dive puts the efforts of Australian swimming pioneers in context and presents a stark contrast to the controlled environment of modern swimming pools.
Other Information Before You Go:
Location: Surrey Park, Surrey Drive, Box Hill, 14 km east of the Melbourne CBD
Latitude:-37.825173 Longitude:145.116395
Getting there: By car take Canterbury Road to Box Hill and park at the Box Hill Aqualink in Surrey Park. Surrey Dive is down the steps at the northern end of the car park. By public transport there are a few options, but bus 767 from Box Hill Railway Station will get you there.
Facilities: Walking paths, bike paths, playground, sports fields, public toilets, park benches, barbecues, the adjacent Box Hill swimming pool.
Entrance fee: None
Water temperature: Mild
Water clarity: Murky
Under foot: Mud
Maximum water depth: Greater than 2 metres
Minimum swimming proficiency required: Not applicable, no swimming advised
Prohibitions including whether you can bring your dog: Dogs on leads permitted
Sun shade: Limited shade around the walking paths, so bring sun protection
Opening times: Always open
Wheelchair access: Yes, but only from the northern end of Surrey Drive, not via the steps from Box Hill Aqualink.
Accommodation Options: If you want to stay overnight in the area near this former swimming hole, you can try accommodation in Box Hill.
Managing authority: Whitehorse City Council
Nearby attractions: Halliday Park water play area in nearby Mitcham.
Before you head out, make sure to read the swimming safety information and check with the managing authority for any current change of conditions.
Locality Map:
The marker indicates the approximate location of the former Surrey Dive.
Comments:
Here are some personal recollections that I have received about swimming at Surrey Dive:

"We had seasons tickets to The Box Hill Baths, as we only lived two streets away. The main man at the pool was Mr. Pruden. You had to go and see him to at least get your Junior Certificate, and be a certain age, before he would let you through into The Surrey Dive. There were rumours that The Dive was bottomless. It had an underground stream, found by the quarry workers. The stream connected Ringwood Lake and The Dive. I do remember the diving board seemed so high, but then The Tower was a huge challenge. Never made it to The Crows Nest, where kids would jump into the water off the clay cliffs. Great times, great memories!"
- A. Nichols from Croydon Hills, Melbourne, Australia 17/2/2021

"I lived in Camberwell Fire Station and when Dad was off duty he would take me to the Surrey Dive after school. It is such a happy 1950s memory for me! I loved the soft water and the depth for diving off the cliff!"
- T. Healy from Broadford, Australia 10/1/2021

"I used to walk from home in Blackburn through the cemetery to the Dive from around 1958. To jump off the cliffs opposite from the main area where the diving boards were was always scary but exciting. Jumping and diving from the big diving board produced the same results. It was a very social scene at weekends for kids from Box Hill High."
- T. Taylor from Murray Bridge, Australia 26/4/2020

"Ahhh memories.. Born in Blackburn in 1946 and when we were not swimming at Blackburn Lake, we would be down the "dive". I can still remember the first time I jumped off the cliff. What a hoot. The dive was a lot more social so spent a lot of weekends and summer holidays there. Went to Box Hill Tech so some of us would go after school. From memory the water was bloody cold!"
- R. Burn from Melbourne, Australia 12/1/2018

"I swam in the Surrey Dive after it was refilled in the mid 80s and a few times my feet got stuck in the clay near the cliffs briefly so we stopped swimming there"
- Arthur from Ringwood North, Melbourne, Australia 12/1/2018

"I remember the Surrey Dive well from the mid fifties, but only from swimming at Box Hill baths as we were warned that Surrey Dive was bottomless and very risky for those of us that weren't competent swimmers. However when feeling very brave we would go through the separating gate and enter the water just on the edge so as to be able to go home and boast to our friends that we had been "swimming" in the Surrey Dive."
- Joan from Coffs Harbour, NSW, Australia 23/11/2016

"My memories are not from swimming in the dive but my father worked for the Box Hill Council for many years in the 70s and 80s and it was his job to work there 5 days a week and even out the area once dump trucks had off loaded their trucks into the hole. I remember every Monday morning he would go to work and have to push all the rubbish people dumped at the gate over the weekend he found lots of things that he bought home. Once he found a kitten too young to be away from its mother but he bought it home and he survived."
- F. Rankin from Queensland, Australia 5/8/2020

If you have any memories of swimming at Surrey Dive, please fill in the comment box below, because I would love to hear about it. All fields are required if you would like your comments published on this website.